My family and I woke up early and headed down to the hotel restaurant to grab a quick breakfast. Because it was April 25, Italy’s Liberation Day, we wanted to give ourselves plenty of time to get to the train station to catch our train to Firenze for the day. Another perk of traveling with the fam- I don’t have to sit in the cheap seats on the train. I got to recline and lay back and fall asleep for our hour and a half train ride- and because I only got four hours of sleep the night before I passed right out and woke up just as we were pulling into the station in Florence.

Our first stop in Florence was Il Duomo of Santa Maria del Fiore- the most beautiful church I’ve ever laid eyes on. The facade of the building was so intricately carved and designed I couldn’t take my eyes off of it. We waited on line for a little and then we picked up our audio guides to a take a tour of this masterpiece.

The tour was very helpful because we weren’t just walking around looking at paintings and such. It gave me a lot of useful information and put everything into context. 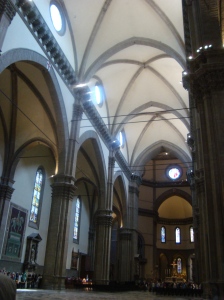 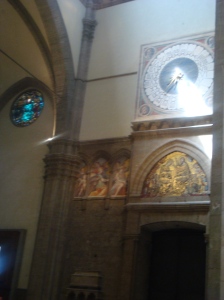 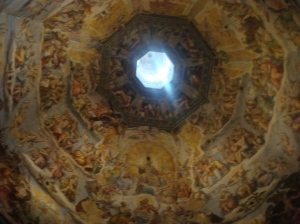 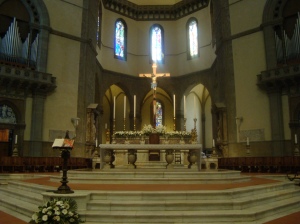 The church was spectacular and truly a work of art. The dome was unbelievable and so detailed and the images and events that I found out that are depicted on it blew my mind. When we were done with the church, which took a little more time than we allotted for because I couldn’t tear myself away, we headed over to the Galleria dell’Academia- AKA where David lives. On our walk there we stopped for gelato and I had a donut almost as good as the ones Tee, Matt and I ate in Naples- which you can read about here. We also ran into just about the cutest little old Italian one-man band. He was walking down the streets with all of these instruments connected to different parts of his body so that when he moved that limb or pulled that string music filled the air.

We got to the Galleria and were met with a very long line so we made a reservation and stopped at a little leather stand to do some shopping to pass the time. I got a very colorful wallet that I would replace two hours later because I really wanted the official Florence stamp on it and this one didn’t have it but the man selling them said that no wallets have it and like a dumb tourist I believed him (the New Yorker in me is very mad at myself). I also got a purple glasses case with the official stamp on it that it sitting in my nightstand right now holding my new sunglasses that I got the following day. Still trying to pass the time until our 2:30 reservation for the museum we grabbed a quick bite in a little deli and then headed to the Galleria.

Renee had been to Florence before and had seen the David and told us all that it was so cool. She said you walk into this long hall and at the end of it surprise! is this massive sculpture. I was in shock when I saw him because I didn’t think he would be that large and grand. But now I know what all of the hype is about and I took a very long look at this figure that I spent so much time studying in high school and was blown away. My favorite part about this had to have been the commentary my little nuggets gave. They were both standing there, looking up at this grandiose sculpture and in all seriousness Maddie turns to Nicky and says “Nicky, we’ve seen his penis now let’s go see his butt.” Needless to say they were a little shocked by all of the nudity they saw during their time in Italy.

Also in this gallery that is much overlooked are Michelangelo’s unfinished pieces. These offer a glimpse into the mind of a genius as you stare at the half-alive figures as they almost fight to break free of the marble from which they are created. It was very eye-opening. When we were done taking illegal pictures of Michelangelo’s masterpiece we headed over to the Uffizi to enjoy some more beautiful works of art.

Renee and I waited in line for a little over an hour while dad and the kiddies sat in the square by the Uffizi and watched men paint. When we finally entered the museum we made sure we hit all of the famous paintings so we could get to the Ponte Vecchio with enough time before our train. Going through these paintings I realized that I had also studied them in high school. It has been a bit surreal seeing all of the things I admired in a textbook or on a computer screen in person all over the world. We took some more illegal pictures of some famous paintings and roamed the halls of the museum. Renee, dad and I were all talking about the millions of pieces of art work in the world and we just couldn’t believe how many museums have so many pieces from all throughout history.

After we walked the museum we went to its rooftop cafe to enjoy a quick bite to eat overlooking Il Duomo. We also had an uninvited guest arrive at the table when a little pesky bird wouldn’t go away and actually got so close to us he flew onto my plate and started picking at my pizza. 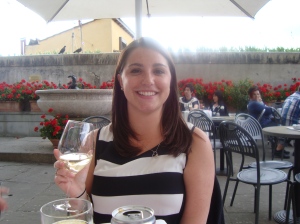 Officially freaked out by the birds, we finished our food and then headed to do some shopping on the Ponte Vecchio. We were almost at the bridge when we stopped at another leather stand and bought some more stuff. Here, I replaced my wallet with a beautiful soft-as-butter red wallet with colorful inside details. My little sister got a bright blue pocket book and Renee bought a really pretty patterned pocket book for Tee. Nicky opted out of something leather and instead got Italian-flagged themed sunglasses, which he totally rocks. Finally we made it to the bridge. It was so weird, once again, seeing something I had read and heard about in person. We popped in and out of many jewelry stores on the bridge until we came to a leather jacket store. Immediately upon entering, Renee found the perfect coat for herself. It practically screamed Renee and she looks amazing in it! I then found my baby- a beautiful chocolate brown leather coat. It is the softest thing I’ve ever felt and if it hadn’t been so warm here lately I would never take it off. My dad, who was the best sport ever all vacation as we stopped in virtually every store to shop, finally felt the need to hurry us along so we didn’t have a repeat of Naples and miss our train. Our cab driver was great and took us down a bunch of teeny tiny little alley ways as we fell in love with how Italian Florence is- and we didn’t even miss our train. 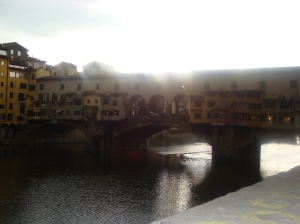 “Wake up in the morning with a smile on your face for no reason other than the sheer fact that you are so in love with where you are in that moment.”

I am a reporter and digital producer for the Civic section of U.S. News & World Report, where I write about breaking news. I came to U.S. News in 2016 as a researcher and writer for the Rankings and Reviews section and in 2017, joined the news team, where I helped launch America 2020. I have previously worked for LifeZette.com as a reporter and social media specialist and was an editor for several outlets at my alma mater. I am a graduate of the Philip Merrill College of Journalism at the University of Maryland, College Park. You can follow me on Twitter (@arlardieri) and Facebook (/AlexaRLardieri) or connect with me on LinkedIn (/in/alexa-lardieri). View all posts by Alexa Lardieri

Thoughts? Let me know what you think! Cancel reply

This site uses Akismet to reduce spam. Learn how your comment data is processed.